The wedding of Adam Hackett and Katrina Quinell

The wedding was an absolute success. The event started at the Bucks and Hens nights the Saturday night before the wedding. Adam's swan song was in an Indonesian fishing village called Crab Claw Island which is about 150km out of Darwin. The agenda was simple and effective - buy food and beer, pick up Jeremy (the pace setter) and Johanna from the airport, drop off Johanna, drive out there, drink beer, chew the fat, do something silly, go to bed, get up and have greasy breakfast and drive back. A tried and true formula and a Top Night in the Top End. 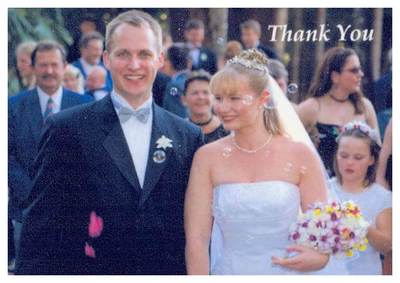 Sarah, Chris, Melissa and myself had only flown into Darwin the night before, so Sarah and my first experience of the Top End was basically Hackett's bucks night and Katrina's Hens night - which set us in good steed for the remainder of the holiday. It was a good opportunity to meet Adam's friends and soon to be family. In terms of extra-curricular entertainment all we had were a few copies of Picture magazine, not so back at the Hen's night....

When we arrived at Crab Claw Island some of Adams mates had managed to bring in some HUGE mud crabs, which were lightly steamed with garlic and white wine on the BBQ by Batesy and Micky - the crabs were sensational. Later in the evening Welberry got it in his mind that he had to go for a boat ride and managed to convince Micky to put the boat in, start it up and go for a spin. Which got Micky reprimanded from "management" for driving at night without lights.

Chris was apparently very tired from the flight the previous night and had to retire early, soon afterwards there was almost a mixup between Chris and Adam with Chris almost having his eyebrows shaved off.

Katrina's friends had organised a party at their house where all the participants had to come in eighties bridal dresses. From what I can gather from Sarah and the photos the party went nuts - including the stripper being hijacked and sexually assaulted.

Everyone survived and the week long wait began for the big day. We did the three day "Kak dash" during Monday, Tuesday and Wednesday. We were joined by Setch, Fruity and Nan later in the week. Spent some time seeing the sites around Darwin and generally catching up.

Friday night presented an opportunity for a more traditional bucks night, that is a few beers the night before the wedding. Katrina and friends had booked into the hotel so Adam was home alone with nothing to do.

The whole thing got started in the afternoon at the appropriately named "Shennanigans Bar", then moved to the our backpackers accomodation - Frogs Hollow (which we can highly recommend) and ended up back at Adam's for pizza and some (amatuer) film production on Adam's new digital camera - nothing too heavy just some light wedding/life advice etc.

Saturday was the big day and proceedings started at 4:15 at the Botanic Gardens. The service was very pleasant, and Adam was the most nervous that I have ever seen him. Everything went without and hitch and the newly wedded coupled were whisked off for photos.

In the meantime there were more that a few lads that had worked up a hard earned thirst and were licking their lips in anticipation of the main wedding reception attraction - FREE CROWN LAGERS!!!! Quite a few of Adam's friends had been talking about this indulgence at the Buck's night, and now it was time to live the dream - yeeeeeeeehhhhhhhaaaaaaaaaaaaaaaa.

The wedding reception area was fantastic, an open plan restaurant set on rolling lawns that went down to the beach that looked out onto Darwin harbour, the pre dinner drinks were perfectly timed for a huge Darwin sunset, which are really amazing.

The food was sensational, barramundi and beef for mains which were cooked to perfection. The speeches were both interesting and humourous. The union of Adam and Katrina and there families was a success. (Although I think Chris in his best man speech may have leaked more information on school day car antics than Adam would have liked). The free crownies went down like free crownies at a Darwin wedding.

As all weddings seem to go, the whole thing was over in a flash and the crowd had formed a circle and were wishing farewell to the couple. Jeremy, Johanna, Fruit, Nan, Setch, Sarah and myself headed back to Adam and Katrina's place for a few nght caps and last minute philosophising before retiring for the evening.

It is official, Adam is now domesticated, I've seen it with my own eyes.