Friday evening Michael, Sarah and I packed up the car and headed off for Edrom to join 20 or so friends for a long weekend (Queen's birthday - one advantage of not being a republic) of partying and fun. During the two hours or so we spent packing up and getting ready it belted down rain (for the first time in months). I thought it was a bit ominous, but typical long weekend weather. 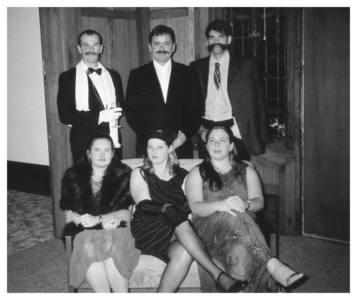 Ended up leaving a bit later than expected and arrived at Edrom lodge at 1:00 am, fortunately Chris, Jacqui and Steve were up keeping the fire company with a few beers (Paivi and Tina were already sleeping). And there was a message from Setch and Caroline that they would be arriving in about an hour (from Melbourne). Had a beer or two, then another few to celebrate the arrival of Setch and Caroline.

Saturday was a lazy day in the sun meeting people as they arrived. Welberry and Melissa showed up first, then John and Paul (looking like they had just stepped out of a Darling Harbour disco - the only supplies on board: VB), then Ray and Nat, and finally Alind, Anshu, Momo and Tracey. Other activities included swimming, eating, talking and playing trivial pursuit. After lunch started getting ready for the 1930's cocktail party (and I was starting to get sweaty palms and was having trouble concentrating - I still had time to change to my mind, maybe). Just before kick off Peta, Jamie, Roberta and Amy arrived - we haven't known them very long but they soon got into the swing of things.

I was a bit worried that I'd gone overboard with my costume (Biggles) but as it turns out everyone went to a huge effort on the theme idea, which was excellent, (apart from the Biggles imposter - aka Ray Skinner). The fireplace was roaring, the music was on, Caroline was making cocktails by the litre - it was now or never. 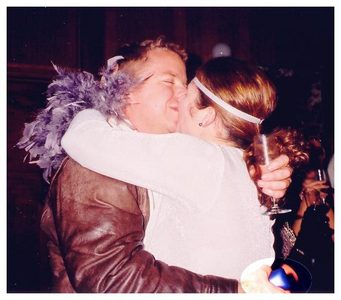 I went to the kitchen and had a quick confidence booster (the alcohol so far didn't seem to be having any effect) and wandered back out. The ring was in place, I was wondering how I was going to get this over with when someone suggested a toast and the music was turned down. From this point on everything seemed to be in slow motion "Firstly I'd like to thank everyone for coming etc etc , I'd like to propose ... a toast" at this point Chris Thorp predictably yells "What, what - he's proposing what" which I was ready for - "Nothing, no major announcements" (deliberate red herring) - "I'd like to propose a toast to the chefs and to absent friends" cheers cheers (one final check of the ring: right - chocks away!) "As most of you know Sarah and I have been going out for a little over three years, during that time she has made me incredibly happy, she's my best friend and I'd like to take this opportunity to ask Sarah to marry me . . . . . . . " (right - too late now, the cat is definitely amongst the pigeons.) Now the whole room is quite, waiting for Sarah to speak. Apparently a few people thought I was joking and were waiting for me to say "just joking - let's party". After what seemed liked an age Sarah said yes, the music started and the rest is history.

Later in the evening Setch and Ray kindly got up and said words and proposed a toast and my old friend Alind stood up, introduced himself and sang a beautiful Hindi love song - I can't remember the words but I can remember the sounds - definitely on the play list at the wedding.

Thanks to cache technology, Thorp managed to extract the lyrics to "scottandsarah.com" from his laptop - then Chris, Jacqui and Caroline cranked out a rendition of a song that started the whole thing on New Years Eve 2002. I knew when I heard that song for the first time that there was something that I had to do.

Next was phone calls on the veranda to parents, friends etc - Caroline's Long Island Iced Tea had well and truly got into second gear by this stage so had to keep the phone calls brief (for everyones sake).

Chris and John then strummed out a few tunes on their guitars - the events of the evening started to catch up with me and I was getting a bit tired and emotional (as a newt) and had to pop off to bed.

Shaky start to the next day - my first recollection was Michael knocking on the door and saying that he couldn't see properly - neither could I but it seemed something a little more serious. Something about blood in his vision, I bravely jokingly predicted retinal detachment - that is irreversible eye damage. I had a quick look and said it looked like a bad case of Christian Brothers Disesase (ie his pupils were buggered). Not being of any further use I had to go lie back down. Fortunately, Alind and and Anshu took him into Merimbula hospital where the GP said that it looked liked his retina was detaching and that he had to get to Canberra ASAP (I should have been a doctor). Michael came back to Edrom to get his gear and Sarah drove him back to Merimbula where the hospital kindly provided transport to Canberra. Michael was seen later in the day at the Canberra Hospital - fortunately it wasn't as serious as it could have been and it is likely that the haemorrhage will heal itself without requiring surgery.

Sunday morning was extra lazy - the more active folks going for a walk around Ben Boyds tower. I had to mentally prepare myself for a few hours chainsawing for the upcoming bonfire- which wasn't helped when I realised that the ear muffs were still in the car which Sarah had just taken to Merimbula. I'm not really a chainsaw enthusiast and the only decent bits of wood near to the beach were inconveniently on the side of a steep hill.

Some perserverance, luck and help from everyone stacking the wood resulted in a respectable bonfire. Meanwhile Alind and Anshu started preparing dinner - an Indian feast (lamb, vegetable, dhaal, raita, papadoms and basmati rice). Not up to the usual standard of bonfire food (John was wanting to know where the raw turnip curry was), but not bad. All washed down with a few beers.

Welberry was in his usual "I have to light the bonfire right now" mood and couldn't settle down until people were making there way to the beach with the fireworks, petrol and matches (and picnic hamper full of red wine, some food and more red wine). The first plan was to soak the whole pile of wood with 20 litres of petrol and ignite with incoming sky rocket. I think we left too much time between dousing and accurate skyrocket - we were down to two matches and one skyrocket, even with a direct hit the thing didn't light! We ended up lighting a regular firework with the last match and throwing that in, which only started a very unspectacular fire on the far side. This was unheard of! I think we should have had more diesel in the mix to prevent the evaporation. Anyway, Ray was off to get some diesel to try and save some face - when Jacqui showed her latent fire skills by lighting a hidden puddle of petrol on the nearside with a piece of flaming seaweed - nice work. The pile of wood promptly started to burn like a big pile of wood soaked in petrol; smiles all around.

Phase two was the huge bag of fireworks imported from Canberra, it had the whole range, from small, quiet showers of sparks to light industrial mortars. It was the latter that was the down fall of Welberry. I think the first judgement error was proximity to the seated audience, probably related to Chris not wanting to walk to far from the warm fire. The second misjudgement was the softness of the sand, ie its inability to sustain repeated mortar launches in a short period. It must have been the biggest one in the bag - an exploding rocket with at least 6 rounds (gatling gun style), from what I recall it shot projectiles around 10 metres in the air (about the same distance from where everyone was sitting from the base of the firework) which then exploded with a huge noise, on about the third one the force of the launch toppled the firework to be pointing directly at the spectators. I don't think anyone actually got up but there was an awful lot of attempts, and spilt red wine. All I remember is three very loud, close proximity explosions. It was all over before it begun really, the only direct hit being on Thorps leg but that was before it went off. Paul Brajua invented a new expletive from an old word, he just yelled "F**KING"!! I was a bit worried about Paivi, who was sitting next to me and 6 months pregnant, but everything worked out fine.

Needless to say Welberry kept a low profile for the next 15 minutes or so, and quitely sat down mumbling something about fireworks not really been able to hurt you. Setch stepped in and took on the role of my Dad, that is sensible influence, and moved the launch pad a bit further away and sensibly buried the fireworks into the sand before ignition. Although this didn't help when a few of the fireworks malfunctioned and launched directly out the side.

John "Hard to impress" Nichols took on the role of introducing each firework prior to its performance, enthusiastically reading out the Chinese marketing printed on the sides, I remember he was particularly impressed with "Overwhelmed with Joy" number.

After all the excitement, Chris and John got out the guitar and started a cranking out requests for the next few hours. Good food, wine, a fire, friends and Thorp and John playing old songs - nirvana.

Eventually the crowd thinned, the fire died down and it was time to wander back up to the house and to bed. Although I think a few folks kept going around the fireplace for a while. 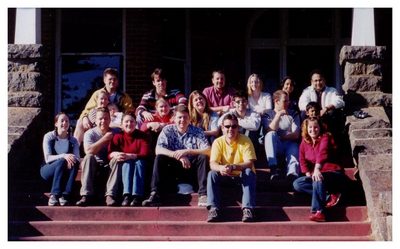 The next morning was spent packing up, cleaning up, talking and generally getting ready to leave. We hope everyone had as good a time as we did, those halcyon days always go too fast for me.